Yet Another In A Series Of Satirical Environment Related Posts: Earth Day Suggestions 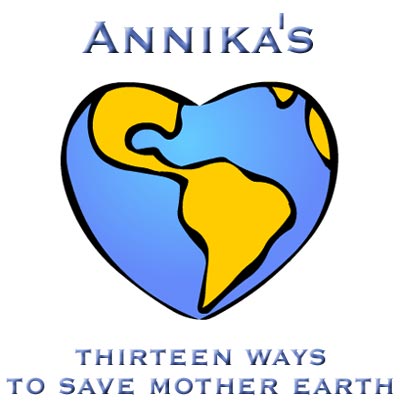 It's a well known and scientifically accepted truth that we are all on the verge of a major environmental catastrophe, which can only be averted by the election of Bronco Bomber. Unfortunately, we can't count on the gun-toting, God-clinging, xenophobic racists who vote in this country to recognize the Obamessiah as the Planet's one and only salvation. It doesn't look good for the old Obameister right now, but don't despair. We can still do our part. Here are thirteen practical suggestions for making this year's Earth Day count:

1 You know, this along with your "save the earth" button might qualify you for a Nobel.

2 Yes, Stew, that is precious work. Annie, you've outdone yourself, yet again. That list is friggin' hilarious. Points #4 and #12 were my favorites. Though, I would modify #4 to just say: "Don't breath...at all. Your mere existence further weakens Mother Gaia, you selfish prick." The only thing that is more nauseating than the hysteria generated by "climate change" are the "solutions" that politicians want to implement. They seem to be nothing more than Luddite-inspired versions of the Great Leap Forward, but in reverse*. I'm not looking forward to when this thread is inevitably hijacked by a certain greeny, "moderate" killjoy. *Dismantling our industrialized economy in order to make environmental "progress"

3 Nice list oh Funny One. Did you borrow number 8 from the Obomber people? It really reminds me of their campaign, words without qualifiers.

4 Eh, I've been doing all of those things for years, but in my case out of sheer spite. On a tangentially related note, dear Hemlock's father has passed. You may enjoy his brilliant observation of the human condition. Don't miss the last two paragraphs. They're positively Waughvian. Alas, I can't post the link, since munu hates certain websites. Just search for Hemlock.

5 "For instance, a hollowed out leek makes a great condom..." "Eh, I've been doing all of those things for years, but in my case out of sheer spite." Buh?...

6 Fuggit, I'll post the verbage. Hemlock lives in Hong Kong, and has traveled to Blighty for the event. The last two paragraphs of his post: The big excitement in this little community today is a children's party in the church hall. At one stage in the proceedings a parent displays his deeply held and already well-known convictions and his determination to shape his offspring accordingly. No, Tarquin! the man suddenly shrieks across the room as if his three-year-old son is about to stick a finger into a power socket. The father leaps over and snatches a small hot dog from the petrified child's hand. The kid bursts into tears. The father turns to the dozen or so stunned adult onlookers. Tarquin doesn't eat meat! he exclaims. Tarquin goes into a tantrum, wailing and thumping the floor and pointing at other toddlers chewing their pork-laced little morsels. His dad, posessed by the total righteousness of his behaviour, holds up the offending item. He obviously confused it with the vegetarian sausages we have at home. At Stonegallows Hall, plans for my father's funeral have been finalized. On hearing that it would be a humanist affair, I assumed it would be brief, informal and without such baubles as a grandiose coffin and extravagant wreaths. I pictured a simple consignment to the earth in a pleasant and unmarked spot, the body perhaps tied in a plain cotton shroud, with some acorns thrown in as the grave is filled with the last few inches of soil. Provided no druids turned up, that would have satisfied the old man's atheism and dislike of fuss and ritual, and mildly offended all the right people currently organizing masses to be said for him on both sides of the Atlantic for the repose of his soul. As it happens, survivors have ordered shiny casket, flowers, pall bearers  the full works. The standard Christian ceremony with God carefully teased out. It is for people who say they don't want, need or believe in something, but deep down they really do. In this respect  and I am absolutely positive there is no other  it can perhaps be likened to a vegetarian sausage.