The Becker Stance Wherein i toot my own horn and pretend like i'm an expert, just a little. 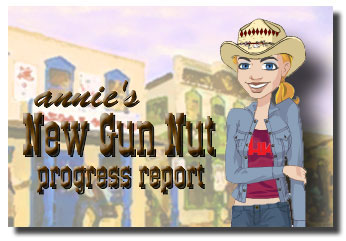 i'm ready to say it now. After only eight week's experience shooting pistols, i'm pretty confident that i can take down any assailant at 25 yards, given a quality firearm, and assuming i don't freak out when the time comes.

i was uncomfortable making that boast before now, because i'm basically a self-taught shooter. But everytime i go to the range i'm amazed at how much other people suck at pistols. i look around at the other targets and the holes are shotgunned all over the place. Many of these guys are law enforcement types, too. i consistently outshoot my boyfriend, who learned how to shoot in the military. At the ranges i go to, i've noticed most guys like to shoot at 7 yards predominately. i've gotten to the point where 7 yards is no challenge for me anymore, and i shoot that range with my prescription glasses off.

Am i that good or are other people just that bad? i have no idea. i'm not going to go tap a stranger on the shoulder and say "hey, why do you suck so bad?" Especially if that other guy is armed. So i'm left only with my theories.

My first theory is that people look at aiming and pulling the trigger as two separate and sequential actions. i think that's my boyfriend's problem. He takes aim, then he pulls the trigger. In my humble novice's opinion, i think you have to concentrate on aiming the whole time, and the trigger pull should be slow and almost unconscious.

i read somewhere that you should be surprised when the gun fires. i also harken back to a book i read long ago, called Zen in the Art of Archery. In that book the Zen master constantly harped on letting the arrow go only as a natural unconscious act. Like snow falling from a bamboo leaf, the arrow should fly when it's ready, no sooner and no later.

i think the same philosophy can be applied to trigger pulls. So i take aim and concentrate on lining up the sights properly, keeping the gun as steady as i can. As i'm doing this, i begin pulling back on the trigger. Once i begin that action i try not to think about it anymore. i especially try not to anticipate the shot. i keep my mind focused on the sight picture and when the shot happens, it happens. That's one reason why i hated the Glock. i need a heavier trigger pull because my squeeze is so slow.

Another theory is my stance. i've done some research about the Weaver stance, but i never really felt comfortable using it. i think it allows for too much movement in the elbows, especially since it requires the muscles of both arms to be working against each other. Here's a good site that describes the various stances.

My stance is more like the modified Weaver described as the Chapman in that website. First i take a 45° stance with my left foot forward (i'm right handed.) i lock the elbow of my gun arm and point the elbow down. Using my left hand, i then pull the gun arm toward my body until it lines up on the target. i also pull my right shoulder blade rearward until it stops.

The main difference in my stance is that i place my left hand under the grip, palm up. The fingers of my left hand go around the outside of my right hand, instead of covering the fingers of my gun hand. i think this allows my left hand to support the weight of the gun better, and also makes it easier to pull my right arm against my body.

Another advantage to my hold is that it gets my left thumb out of the way. Using the conventional hold, i once noticed a temptation to use my left thumb to assist my trigger finger as i got tired. My new method eliminated that temptation.

So does it work? i'll let you be the judge. Last weekend, i shot the target on the right using a Sig Sauer P226 in .40 S&W. The cartridges were Magtech 180 gr. FMC, which have a muzzle velocity of 990 feet per second. As you can see, i was least accurate at 25 yards, aiming at the head. Actually, i'm better with the HK at that range. i like to leave a target like that out there for a while so the other suckers at my range can see it and be properly impressed, before i swagger out of there.

1 "i consistently outshoot my boyfriend, who learned how to shoot in the Seabees", lmao, learned being the operative word. "i think you have to concentrate on aiming the whole time, and the trigger pull should be slow and almost unconscious." That's right, only with the symantical argument of what you mean by "aiming". Aiming is finding the target through the sites, while siting is alligning the sites on the target, thus creating a "site picture". You're doing this naturally now. Like golf, once you start thinking about it, it will get a lot harder, lol. Accurate shooting is all encapsulated in the discipline/ability to hold the site picture while squeezing the trigger. A good shooter hits what he is shooting at no matter the body position. Just remember ASS; aim, site, squeeze.

3 You're exactly right about what a good trigger pull should feel like. The great trick is learning to compress that process into a fraction of a second -- what I've often called and heard called "a controlled jerk" -- which is what you'll likely have to do if you ever have to defend yourself. I personally believe that poor trigger control accounts for 80% or more of most handgunners' accuracy problems. It's awfully easy to jerk the trigger, especially when you're trying to shoot fast -- and doubly so when you've got a little adrenaline flowing and your fine motor skills are in the shitter. The stance you describe is pretty much the one I use, although I keep my left hand in the traditional position. (Supporting the pistol's weight isn't my primary concern; recovering from recoil is. And keeping the thumb out of the way becomes instinctive with practice -- or with your first painful lesson, if you're careless.) However, some quite knowledgeable people claim that you should always train using an isosceles stance, because it's what you will instinctively and uncontrollably resort to in a sudden crisis. Supposedly, it has to do with the fact that human beings have binocular vision, and process most of our information visually when under stress. That's very plausible to me, and comports with my own experience. (I've never been in a gunfight, but I have experienced the fight or flight mechanism kicking in.) I haven't started practicing with the isosceles because I'm an old dog, and it's hard for me to learn new tricks after nearly 30 years of shooting (and about 25 years of handgunning). But since you're just starting out, you might want to consider adopting the isosceles.

4 That trigger pull sounds about right on to me. You may want to add "calling your shot", where after the gun fires and before you look at the target, you call out where on the target you think you hit, relative to the bull's eye. For example, "twelve o'clock" or "four o'clock, nine ring". This is supposed to keep you focused on the sight picture all the way through the trigger pull and the gun firing.

5 Your modified Weaver is a good stance in terms of self-defense. If Le Bad Guy manages to get close, you pull the gun back to your hip, barrel still at him, while using your left to deflect. Shuffle step to one side or the other, resume fire. It's the one I learned and still revert to. Drop my right leg back, fall into the stance, out of the holster comes the pistol, and it's time to work. Your range work is great, accuracy is cool, but sooner or later you need to get to an outdoor range where you can run. Run? Yes. The trick I learned in the academy was that all the stuff a light to medium run does is a good duplicate of what happens in an actual gunfight. Heart rate goes up, breathing becomes harder, etc. Run, work up a bit of sweat, then pull your pistol and go to work. Target shooting is great. It's fun. It is, literally, a blast. But if you're talking about a handgun for personal defense, you have to think combat, and at that moment -- with a pistol -- sight picture/sight alignment go out the window and you're reduced to point-shooting. 7 yards is the magic number for bringing your pistol up to shoulder, looking OVER that lovely front sight (because it's all about that front sight), and shooting until Le Bad Guy drops. When you shoot to develop combat skills is when you appreciate wrapping your left hand around the front of the right, because you use it to help pull the gun out of recoil for a decent double-tap. Always work on your trigger pull because a good, smooth squeeze works for target shooting and combat. And under combat, when all goes to hell, your finger remembers what you taught it. Never give up target work, because the more you shoot the more familiar you become with your pistol (always a good thing). But if the weapon is for defense, at some point it's time to work on combat skills. Then the real fun begins.

6 Well there you go, Bob takes you to another level, but that's the paralysis by analysis cop thing. I'd expect to hit the target before he got to me, and then grab him by the throat and simultaneously choke and beat him to death with the pistol if I didn't have a contact shot left, thus my affection for the colt .45. You DO know how to choke someone with just your thumb don't you?

7 Annie: Try not to shoot yourself in the foot while you are patting yourself on the back. Remember, guns don't kill people, people do. Safety, safety, safety. You cannot be too safe when handling a weapon. Most people killed with a gun are killed by an "unloaded" one. Good one about ASS; Hell, that's just about all the folks on this blog think about anyway, 'cepting football and politics. Come to think of it, what else is there?

8 http://mysite.verizon.net/jimroth/2005/09/on-shooting.html here is a blog post by some shooters in texas on the stance bob mentions. I am going to give that a try next time I am at the range.