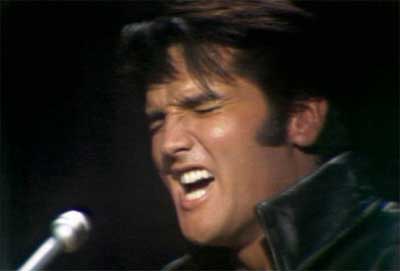 By the mid-'60s, The King was washed-up, so his detractors claimed. The world was being wowed by the experimentalism of The Beatles, the Stones' dirty rock'n'roll, the string-drenched sonic onslaught of Phil Spector. Presley was a distant memory, an anachronism, remembered mainly for his decline from hip-swivelling slick-haired rock Adonis to slightly campy balladeer sleepwalking through a string of bad movies. Then, in 1968, after years absent from live performance, Elvis decided to put on a show in Las Vegas, go back to his musical roots, perform some rock'n'roll standards with a stripped-down band, recapture the raw energy that characterized his '50s heyday.

It should've been a disaster - like, who was this old nark with his bad hair and blues standards? But no! He gathered together a coterie of brilliant musicians, including ace guitarist James Burton, slung on a leather jacket and a six-string, and got up onstage and blew everyone away.

He kicked off with 'Blue Suede Shoes', went on to do 'The Wonder Of You' which stayed at Number One in the UK for six weeks, joked with the band, improvised, messed around, looked cool, and won millions of fans back. From then on, until his death in '77, he remained The King, and his crown was never threatened again.

1 Yes, and then his daughter married the queen of pop. That's why lions eat their young.

2 "I'm caught in a trap I just can't walk out because I love you too much baby Oh, why can't you see what your doin to me when you don't believe a word I'm saying" Hey casca, What bowl do you think your Buckeyes will be going to? Will they play Notre Dame? Looks like my Longhorns will be in the big game vr's USC. I can't believe that Colorado din't even show up for that game 70 to 3 is just embarrassing. My other team LSU didn't look so good though. Oh well, can't win em all. ANNIKA, Idon't know how you felt about Johhny Cash, but if you haven't yet seen "Walk the Line" I highly recommend it. ciao

3 Well Beemer just finished proving that he's a shitwit, and the Dawgs tromped those inbreds from Louisiana, so OSU should jump to the four spot in BCS with only one team in front of them that they haven't played. ND deservedly or not should jump to six, which makes them an auto BCS pick. By rule, Oregon is out of the running now. As I've said all along, it should be OSU/ND in the Fiesta. We'll be thumpin' Leprachauns for New Years, WOOHOO!

4 {and the Dawgs tromped those inbreds from Louisiana,} Uhhm, like I guess there are no Inbreds in Georgia? Besides, Les Yards, er Les Miles looks too much like Al Bundy.

5 I hope you do tromp the Golden Domers, but you got to admit, that Jeff Samardja is the most exciting White reciever since, er... well, can't really think of any other exciting white recievers.

9 Gonzalez who snagged the gamewinner against U of M? Samardja is incredible, so is ND's QB, but they haven't played a defense like Ohio State. They also don't have much of a defense. It'll be good to see the line.

10 Lisa Marie was a sweet, quiet little girl. When she was five or six, she and my daughter were in school together and used to have play dates. Sometimes I'd drop her at Priscilla's, other times at Elvis' house. Priscilla always came out herself, Elvis always had someone else doing it. I always wondered how she made such a stupid mistake so as to marry that poor black boy who is going to die a rich white man. (I guess no one liked that "exciting white wide receiver" pun)

11 Shit Shelly, you haven't heard her lately. Crass is the word that springs to mind. At least Elvis had some class with his redneck ways.

12 i lol'd at it Shelly. btw, i saw Lisa Marie and Kirstie Ally once. They were so wasted! They ran into a bar just to use the bathroom, then ran out again. Everyone was like, "was that who we think it is?" Brush with fame i guess. And Kirstie really was enormous in real life.

13 Thanks Annie, I needed that. Casca, I HAVE heard her lately, that's why I shared her history. She was a darling little girl, quiet and shy, and my daughter was very outgoing and popular. Priscilla called constantly to make play dates, and my daughter liked playing with her. But even then (73-74-75) things were weird at Elvis' place. I guess parenting does pay off, one way or another.

14 i wonder if she's gotten a chance to speak with her dad since he faked his own death and became a "Federal Agent at Large?"

Apprentice Blogging My money is on Randall. He's a team player, who knows when to lead, and when to play the supporting role. His past mistakes have not stuck to him. The chick, on the other hand, will always be remembered for her ill-advised loyalty to that loser friend of hers in one of the earlier episodes. She's good, but can Trump expect that she'll never make another judgment call like that?

It seems this season can't end soon enough for Trump. He axed two last night. Anybody know if the show's been picked up for another season? i think Trump's getting bored with it, like the show is one of his ex-wives.