Reflections On A '95 St. Supery Cab i'm no wine expert, but i'll give it a try. i emailed Pursuit, who is the unofficial sommelier of annika's journal, and asked him if it was time to drink that $12 bottle of '95 St. Supery Cabernet i'd been holding onto. He responded thusly:

I'd suggest that you drink it pretty soon.

I hope you've kept it on its side

and in a reasonably cool place.

No place is cooler than wherever i am.

While some reds can be great beyond ten years, my guess is the St Supery is probably in its sweet spot now.

So i tried it with beef this weekend and, while it's not Silver Oak, it was good.

(If you're ever in Napa, i recommend the St. Supery winery tour. Very informative.)

As for the '95, i liked it. Almost rust in color, plum and berry predominates, and there was no trace of tannin. A hint of oak [i have no idea what i'm talking about, btw] and big but not overly complex. All in all, a good $12 investment.

Update: Although i have no idea what a tannin is, this pro seemed to agree with me that the '95 didn't have any.

1 You must be the only college student in history outside of the Royal Family that has a wine collection. Or you were going through your sock drawer and found this bottle of wine. Which is it?

2 heh, if you're trying, you'll figure it out. There is nothing like a soft red with some good beef, mmmmmmmmmmmmmmmmmmm. I have a largish collection.

3 WTFO, try the entire fucking valley if you're doing the tour thing. I am particular to Maryvale.

4 I think Pursuit gave you some decent advice. But I'm not a sommelier, and nothing stays on my wine rack longer than a month. Call it a desire for immediate gratification, or whatever.

5 Every wine which has ever been recommended to me was a bitter undrinkable shoe polish. I find I can only drink rhine wines, and zinfindels. And occassionaly a red table wine. It's not that I need sweet wine, it's just that I despise wines which are too dry.

6 Tannin is that factor of a wine that makes your mouth pucker and dry up a bit. Reds tend to have more tannin than whites, which is not surprising, as the tannins in the wine come from the peel, stems, and leaves of the grape vine. It's useful as a preservative, which is why reds age better than whites. It's also believed tannins give the wine an anti-oxident property, which is why a group of scientists started including a glass of red wine each day as part of their diet. They were the ones who did the study!

7 Well mark this day in the books of web history as a big one for the intrepid Pursuit. I have been named the unofficial sommelier to one of my favorite bloggers. This is big, really big and I believe I need to do something to make this special. So I've begun working on pairings with Sig 226's. Preliminary results are sketchy, but seem to suggest that the wine should be enjoyed after the shooting, NOT with. More later, I think I hear the siren....

See, i'm Not The Only Girl Sinatra Fan So is Robyn, of North American Patriot. Here's a great tribute. 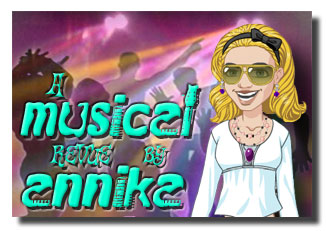 i don't know if any of you take my advice on music, but here's one anyway. Dizzy Gillespie's 1959 recording, Have Trumpet, Will Excite.

i love Dizzy. i'm going to name my son after him. "Not "Dizzy," but "John Birks." How does "John Birks Rodriguez" sound?

The personnel on this record are not well known to me, but they sound great together. i'm especially impressed by the piano player Junior Mance. Check out the first tune for some great piano work.

The second tune, "My Man," is fun with its long moody intro, which leads to a bouncy piece that references two other unlikely classics "O Solo Mio" and "Moten Swing." Dizzy's great sense of humor is on display in this one. 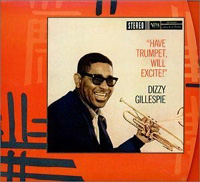 "Moonglow" is a standard, and here it features a long swinging flute solo by Les Spann. On "St. Louis Blues," Spann switches to jazz guitar for another uptempo solo.

"Woody 'n' You" is a Gillespie written tune that always swings no matter who does it, even more so when the author is blowing. High note fans, like myself, should be happy with the man's solo.

"Wrap Your Troubles In Dreams" is another standard, with Dizzy blowing a muted trumpet up and down the scales. It's also the longest song at 7:13.

The next song is "There Is No Greater Love." The title sounds like something Coltrane might have written during his religious years, so i checked the liner notes. But no, it was written by Isham Jones, an old bandleader from the 20's and 30's, who should win the award for "white musician with the most black sounding name." Dizzy's version is a romantic tempo song that's probably the best thing on this CD.

But if you're into jazz at all, take my advice, this is a pretty decent CD.

1 You're marrying some guy named Rodriguez?

2 I will check it out. I listen to the Jazz, Blues, and Reggae channels on my XM radio all the time. XM is great, Unlike broadcast radio, you can just look to see exactly which artist, and what album is playing. And they dont play the same crap over and over.

3 Annika, What's the name of the font on your "Musical Review" collage? Is it on Photoshop?

Quick And Dirty Tom Yam Gong Fans of Thai cuisine know what i'm talking about. If you get the urge for some spicy Thai shrimp soup, but don't want to leave the house, here's what you do. And it only costs pennies.

You need the following items:

Top Ramen Picante Shrimp flavor
can 'o' shrimp
1 teaspoon fresh milled black pepper
half a can of generic brand veg-all
half a can 'o' mushrooms
Soy Vay Island Teriyaki sauce, maybe 3 tablespoons or more
dash of chilli powder, Durkee seasoning or Mrs. Dash
lime juice if you got it, but who has lime juice?

Alright, don't be tellin' me this is not real Tom Yam Gong. i know that. The real shit has lemon grass and big shrimp and those really really hot peppers and is served over a little flame to keep it simmering. i love it when it's so hot it makes you cough. My recipe is fake Tom Yam Gong with noodles, but it can hold you over when you're real poor or real lazy.

Don't skimp on the Ramen flavor, that's essential. It must be Nissin's Picante Shrimp. Also, i wouldn't substitute any other brand of Teriyaki sauce, but that's me. i love Soy Vay's stuff and use it all the time in lots of recipes.

i favor Durkee seasoning and Mrs. Dash instead of Lawry's or other season salts because there's less sodium. Mrs. Dash is especially good on any Asian style soup, i think.

So anyways, the construction of this quick and dirty recipe is simple. Boil 2 cups water, add the noodles, and cook uncovered for three minutes. When that's done, turn off the heat and add everything else. Let it sit covered for a few minutes to heat everything through. Or, you can simmer a little bit longer, but that tends to overcook the noodles.

Enjoy with a beer.

1 I wish I had this when I was in college. Those wholesale-size boxes of Ramen from Sam's seemed like a good idea until about halfway through the semester.

2 I have lime juice. Heh, if you cut up some cheap hot dogs, and simmer them in a can of generic baked beans, and jack them with some BBQ sauce and sugar, you can eat like a king for under a buck. Here King! Here King!

3 u love thai food? U gotta make fiend with me, I am one of the better amateur chef sppecializing in 'exciting food' like thai food. Drop me an email or drop by my site DivenTalk, u will love me.

Don't forget to listen to a Louis Armstrong song today.

My favorite, and I'm probably not the only one here, is "What a Wonderful World."

2 Thanks for the reminder Annika. And Amy, you should check out his stuff from the 20s and 30s. "What A Wonderful World" is okay, but he's not really showing off his true skill--wailing on that trumpet--in that particular song. Tight Like This, Basin Street Blues, Saint Louis Blues, West End Blues. God, now I sound like one of those assinine jazz guys who claims that you can only listen to jazz on vinyl and that Ken Burns is a tool. Well, just for the record, all my jazz is on CD and I think the Ken Burns doc was cool. I'm also a sucker for Armstrong's duets with Ella Fitzgerald--and real jazz snobs wouldn't own up to that (too 'commercial'... translation: too accessible)

3 I dunno what it is about that song, but it just seems to make my eyes well up. I'll dig further.

4 Well, Hello Dolly! Actually, there is nothing better than his 1930's version of La Vie En Rose.

5 I support listening to a Louis Armstrong song every day.