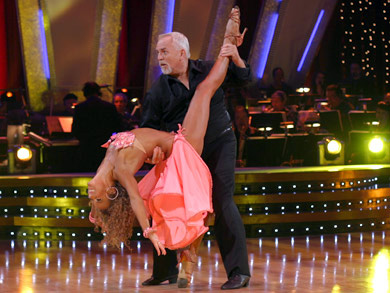 Cliff filling in for Big Pussy.

I guess when Ratzenberger got the call from ABC, it was a short conversation.

"So what you're sayin' is, I get to dry grind with the hottest body on the show, who's basically wearing a bikini and heels, but you can only pay me scale? Umm I just have one question, can I borrow your pen?"

3 Mind phrasing things a bit more carefully next time??!! I read fast, and when I saw your opening line, I parsed it "Cliff filling in big...", saw the picture and damn near electrocuted myself spit-taking Hawaiian Punch all over my laptop! You know how hard it is to breath when you're laughing to the point red punch is coming out your nose? ------ And lookit Cliff's face! He's got that "Hey! Look at me! I'm pretend-bangin' this chick on stage!!" look on his face!

4 There are certain cultural phenomena that I purposely avoid, so I have to ask - when the leg stayed on, did everyone feel cheated?

5 "Dry"? Who says? I think you mistake old Cliff's expression. It's: "oops." Personally I lean toward Karina, with Edyta a close second.

6 karina looks amazing in a blonde wig, but cheryl is the cutest, and the best dancer, and my favorite.

7 THE ONLY HOPE. OUR ONLY SALVATION!!!!! [link edited by annika]

8 And if you'll flip to page 88 in your Kama Sutra, you will see the posture called, "Splitting the Bamboo."