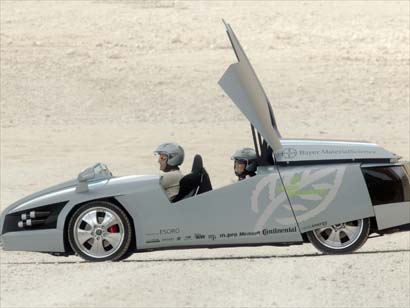 Swiss manufacturer Rinspeed Industries plans to introduce the Senso next month at the Geneva Motor Show.

The 'Senso', which runs on environmentally friendly natural gas, has, not without reason, been labeled the most sensuous car in the world. The 'Senso' actually 'senses' the driver by measuring his (or her) biometric data, and then exerts a positive effect on him with the help of patterns, colors, music and fragrances. A person who is relaxed and wide-awake simply drives better and more safely.

The Senso, while not as articulate as K.I.T.T., seems to care just as much for the well being of its driver.

As both speed and number of cars increase steadily, mobility becomes its own pitfall: the more cars there are on the street, the more stress is induced in the drivers  which might even add to a potentially aggressive mood caused by private or work-related problems. Nowadays, cars are used primarily by individuals, so there is no-one there to soothe the drivers in case of aggression, or keep the drivers awake during a long, monotonous journey. This results in an increasing number of accidents caused by stress or drowsiness.

One solution to this predicament would be a car that reacts to the mood of its driver.

The Rinspeed Senso with zenMotion shows what the future in automotive man-machine interaction could look like . . .

During the trip, sensors constantly measure speed, accelerate-brake-frequency, the driver's pulse, and other aspects that are part of the 'driving behavior'. Depending on the situation, the patterns change to soothe the driver or keep him/her awake, the music volume is adjusted accordingly, and the cabin temperature rises or falls. Of course, this happens in very subtle and unobtrusive ways, so the driver will still fully concentrate on the traffic.

i don't know about you, but the novelty would probably wear off on me after the first week. Then it would just become annoying. Kind of like the show Knight Rider, come to think of it.

The whole project is based on an elaborate sensory system that forms the heart of the vehicle. It consists of a number of sensors that have the job of gathering data about the driver's condition. Firstly, there is a biometric Polar watch to measure the driver's pulse. A "Mobile Eye" camera records his driving behavior, in other words how well and how often he changes lane, and how close and at what speed he approaches the cars in front. Then - this, at any rate, is the vision - a HP board computer evaluates the data and establishes, with the aid of special algorithms, the driver's current state of mind.

In the 'Senso'  depending on the condition of the driver - four small Sharp LCD monitors emit stimulating (orange/yellow), relaxing (blue/violet) or neutral (green) color patterns into the driver's line of vision. They are integrated into the futuristically designed interior paneling, which lights up over the entire area and bathes the cockpit in dazzle-free ambient light.

The optical stimuli are reinforced by especially composed sounds stored digitally on a computer. In addition to the eyes and ears, the nose is stimulated, too  by scents developed by the fragrances specialist, Voitino CWS, which flow into the car through the ventilators. Vanilla-mandarin has a calming effect, while citrus-grapefruit is more stimulating.

Interesting. Anyone who has ever ridden in a car with my brother when he has gas can verify the power of odor to keep a driver awake and alert, if not extremely eager to arrive at her destination. But i digress.

Even the tactile senses are included: should the central computer establish any symptoms of tiredness in the driver, electric motors integrated in the seat will shake him awake by vibrating.

A vibrating seat? Now that has promise.

i bet this car will be a big hit in Germany because, as you know, Germans love David Hasselhoff.

[cross-posted at A Western Heart]