Basic Rat Facts Today I'll discuss some basic facts about your common rat, rattus norvegicus. Odds are every rat you've seen, from white lab rats to the brown rat on the streets of DC (or wherever you live), is rattus norvegicus.

1. Average life-span is about 33 months. There is one unsubstantiated (and, quite frankly, unbelievable) report of a rat living 7 years. Personally, my gf and I have had one rat live to about 44 months, but in that calculation we're taking the word of a member of the psych. department of UNC-Wilmington that he was about 30 months old when we adopted him.

3. Teeth: Rats have sixteen teeth in total--twelve molars and four incisors. The incisors grow 24/7 and are self-sharpening. The incisors are sharp enough, and rat jaws strong enough, to bite through human fingernails. Rats have no canine teeth to hold their prey; instead, their lower teeth can separate into a V-shape to better hold their prey, or do more damage should the finger prey escape.

4. Rats have five toes on their back feet and four fingers on their front feet. In addition, a small fleshy nub on the hand serves a purpose similar to a thumb, allowing rats to grip food, cage bars, and fingers.

5. Rats are semi-color-blind and cannot see reds; however, they can see into the ultraviolet. Rats also have poor visual acuity--about 20 times worse than a human. Pink-eyed whites--PEWs to rat people, lab rats to the rest of the world--have even worse visual acuity.

7. Rats can hear rather high frequencies. Rat laughter is inaudible to humans.

8. Rats are omnivores. Cheese, blueberries, Pop Tarts, dog food, bugs...man, rats'll eat anything, especially if another rat is eating it, which frequently leads to squabbles. Avocado is crack for rats.

9. However, when faced with something new that may or may not be edible, rats will eat only a small bite. If they feel sick afterward, they won't eat it again.

10. Rats are as intelligent as dogs and are very trainable. Rats are excellent mousers, and I believe they've been used to pull cabling (or fish tape for cabling purposes) thru conduit in the construction of aircraft. (I admit I might be wrong on that part--perhaps it was ferrets. But even if it was ferrets, they should have used rats.)

11. Rats are sexually mature at five weeks. Gestation is about three weeks--so, yeah, theoretically, a rat born today could be a grandparent in about two months. Litters average between eight and fifteen pups.

12. Male rats have large testicles. Massive. If a human had testicles in proportion to rat testicles, you'd have cannonballs hanging between your legs. Seriously, these things are fuckin' huge. Bandit likes showing off his balls: 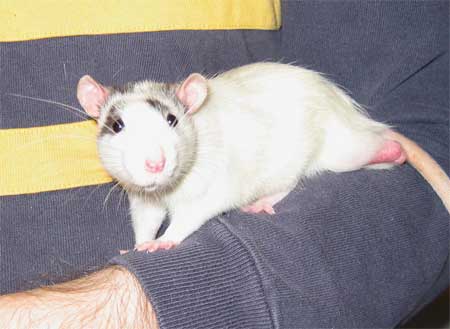 (NOTE: I know this stuff by heart, but for most of the numeric details I am indebted to the most excellent Anne's Rat Page at ratbehavior.org.)

1 I was trying to think of a clever, cogent comment, but I got nothin'. As usual.

2 that was informative, quite shocking when I realized afterwards i enjoyed reading it. rats. whodathunk

3 Rats: better than Anselm's ontological proof for the existence of a loving God.

4 Pretty easy to see why your blog is Tango Uniform.

5 I got it! "OTOH, rat copulation lasts about two seconds." Why's that a problem? I'm sure it's still good for the male rat. ;-)