In Memoriam: Scott Crossfield Yesterday we lost one of the great legends of aviation, and an American hero. Scott Crossfield was the first man to travel twice the speed of sound. He died when his single engine Cesna 210A crashed in Gordon County, Georgia.

On November 20, 1953, Scott Crossfield's Douglas D-558-II Skyrocket dropped from the belly of a B-29 and accelerated to 1,291 miles per hour at about 72,000 feet over California's Mojave desert. He had just lapped the sound barrier, twice.

If you would like to see actual footage of the Skyrocket launching from a B-29, go here.*

If aviation fanatacism were a religion, the entrance gallery of the Smithsonian's Air and Space Museum would be its Bethlehem, Jerusalem and Mecca all rolled into one. As any visitor to this temple knows, all you have to do is look up and you will see alongside the Wright Flyer** a constellation of the greatest planes in the history of the world. One of these planes is the North American X-15.

Scott Crossfield was the first man to pilot the X-15, in its dual rocket configuration, on June 8, 1959. He was one of 12 test pilots, a group which also included Neil Armstrong. The plane flew 199 times, launching from under the wing of a B-52. Thirteen of those flights exceeded 50 miles in altitude, bestowing the title of "astronaut" on the pilots. Two flights exceeded 65 miles.

One X-15 pilot, Michael Adams, was killed when the plane began to spin and hit 15 g's before it broke up over the desert.

Here's a picture after a hard landing with Scott Crossfield at the controls. This was the X-15's third flight, and one of the rocket engines had exploded after launch. Amazingly, Crossfield walked away from this landing unhurt. Stud. 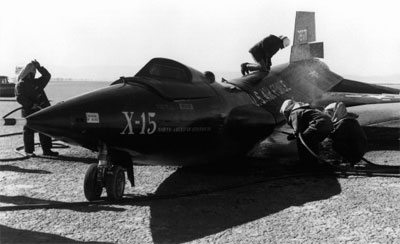 Scott Crossfield survived 30 flights in the X-15, including another mid-flight engine explosion. His last flight was in 1960, and all of the speed and altitude records were set later, by other men. But it was Scott Crossfield who made the courageous first test flights of this amazing and historic aircraft.

The X-15 could go 4,520 mph, almost seven times the speed of sound. It set altitude records that were not broken by any plane except the Space Shuttle until the recent flight of SpaceShipOne. The fifth American to enter space did so in an X-15!

But those are just numbers. Wanna see how bad-ass this thing was? And how insane pilots like Scott Crossfield were to fly them? Check out this unbelievable video from inside the X-15, looking backwards as it launches. I had to run it a few times, and each time I was moved to shout something like "holy shit..." in disbelief. Keep an eye on the upper left, and you can see the contrails of the B-52 launch plane disappear in about five seconds as the X-15 rockets into space.

* By the way, the Dryden Test Center site is amazing. There's so much good stuff here. Check out this fly-over shot of my alltime favorite jet. It's absolutely awe-inspiring!

** Not a reproduction, mind you. I'm talking about the real actual very first airplane ever.

1 If a pilot has to die, this is the way to do it. You can still fly your own plane at 85 and then you get instant death when it crashes.

2 Something like half of all auto fatalities are surmised to be suicides. Plausible deniability adds verisimilitude, plus one gets to drop in the harness, or as The Great Santini would say, "It beats dying of the piles!"

3 My exposure to this world is via Chuck Yeager's autobiography, which I haven't cracked open in a few years but which is an entertaining read. I've forgotten his opinion of Crossfield.

4 I surmise Casca is full of verisimilitude... ...sad to hear; I lost a high school friend who had been at the Air Force Academy. Matt and a friend decided to buy motorcycles and the 1st day they took them out a truck ran a red light; RIP x2

5 *that story is relevant cuz Matt was an accomplished pilot; it takes bravery to fly those machines and these guys get joy out of it.

6 These guys were truly remarkable, but I don't think Yeager was too keen on Crossfield, who he described as taking far too many risks. Funny that only a few years ago Yeager was landing a small plane in north Georgia and got pushed off the runway in a crosswind gust. (no injuries) All these guys are heroes in my eyes, hell the Cessna I fly won't descend half as fast as these guys climbed.

7 Annika, you did sort of strike me as a Blackbird kind of gal. Really cool shot. Thanks for the post and the link to the flyover.

8 My Grandma helped assemble the cockpit of that thing, when she worked at the Skunkworks.

9 Annika, Thanks for reviving my memories of the X-15 and all the brave and fearless guys who flew them. As a kid I was a big X-15 fan, read the books about the pilots and their flights and rue the day the Kennedy administration took the space program from these guys to go with the "spam in the can" approach. This was and should have continued to be the thrust into space not just touching it's hem. Skunkworks eh? I loved that book and love driving up the West Side Hyw. in Manhattan because, as you probably know, a SR-71 sits on the foward deck of the Intrepid. What a sight! We have a friend who was a buddy of Ben Rich's and was a very senior engineer on the B-2.

10 Mike C, thanks. Strawman, didn't the X-15 crowd sort of win when we adopted the shuttle approach?

Coolest Thing On The Internets Of The Day For F-16 fans, a cool video of low level flying through the fjords of Norway. Takes a while to load.

3 Annika, This is one of the best. That kind of action set to music is awesome. For an aerspace guy like me it makes my day to see these machines in action.

Scientists Find Weird Fish Fossil Way The Fuck Up In Canada A bunch of scientists found a weird fish fossil that looks like it might be a transitional species between fish and lizard. Or frog. Or whatever. Between fish and something that crawls or slithers on the land.

When I flew to Europe our plane went over the Hudson Bay. I was amazed at how barren it looked down there. But these scientists were working much farther north than that. In fact, the article says they all carried guns just in case a hungry polar bear came by.

Interestingly, when this fish/lizard was alive, it lived near the equator in the mud of a now non-existent continent called Laurentia. Yeah, 400 million years ago. You gotta love plate tectonics.

1 A transitional species between fish and lizard? That would explain this.

3 Are you the type to be offended about anything that conflicts with creationist doctrine? Unlikely, but I had to ask.

4 That angle didn't even occur to me, Will. I guess as a right wing blogger, that's an obvious question, but I really was just interested in the science of the story. Personally I don't have any problems with evolution. I read Dawkins and it didn't corrupt my mind. I thought he made some interesting points.