Half-Wit, That's All I Ever Heard...
Half-Wit, How I Love To Hate The Word 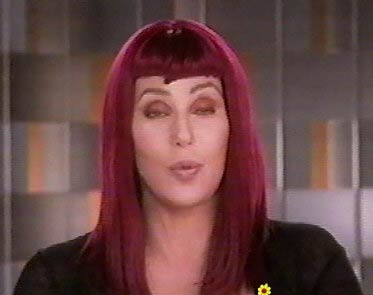 Only a couple hundred came out to see Cher Friday night at Miami Beach's CROBAR disco, but that did not stop the legendary diva from issuing an election warning against Republican control.

Cher warned moveon.org clubgoers to fight Bush, before 'it's too late':

'All the gay guys, all my friends, all my gay friends, you guys you have got to vote, alright? Because it would only be a matter of time before you guys would be so screwed, I cannot tell you. Because, you know, the people, like, in the very right wing of this party, of these Republicans, the very very right wing, the Jerry Falwell element, if they get any more power, you guys are going to be living in some state by yourselves. So, I hate scare tactics, but I really believe that that's true.'

i never thought i'd hear a celebrity say something more idiotic than Cameroon Diaz telling Ofrah Winfrey's audience "If you think that rape should be legal, then don't vote," but Cher's comment comes pretty close.

1 I am reminded of Elvis Presley's classic response to a reporter who asked him his opinion as to whether or not we should be in Vietnam; he said "Lady, I'm just an entertainer." Cameron, Cher, San, Alec, Barbra and a host of other intellectual midgets would be well advised to emulate The King.

2 Of course, (the activity referred to by Ms Diaz) *was* legal in Saddam's Iraq, when perpetrated by an agent of the government (or also, probably, by Saddam and his sons out for their kind of fun) I don't remember a whole lot of complaints from Hollywood about that situation, though.... The reason for the euphemism is that the comment-screener objected to the word that means (the activity referred to by Ms Diaz) What moron writes the decision rules for these programs?

3 Perhaps you don't remember when Sonny Bono, the dipshit's ex, was elected to congress in 1994, thank you Hillary. You certainly don't remember when she dumped him fifteen years earlier. Sonny was the brains of the act. A music industry exec, he made her a star, and when she didn't need him, she kicked him to the curb. Well, when he became a star in the political world, the dipshit just couldn't keep her mouth shut. Sonny was a classy guy, and recognized the top when he reached it a second time. I recall an interviewer asking him what he thought about dipshit's comment, "Sonny has always been the love of my life". Sonny said, "What can I say? She left me fifteen years ago. I have a beautiful wife, and two lovely children." In any case, this whacked-out attention whore, and senior citizen is a walking talking geekshow. The end will not be pretty.

4 Casca, well put. Simply put, and as Bugs Bunny would say, "What a maroon!"

5 Look, celebs making stupid comments about the government is far preferable to stupid celebs actually IN government: Arnie, Sonny, etc. The majority of American are obviously stupid enough to both take political guidance from entertainers and then elect 'em. This idiocy does a lot to explain why Bush still has a chance of winning this election. I only hope that somehow people wake up and punt Bush's rich ass out of office before he has a chance to further screw up the US. Kerry went to war, fought, learned something, and has done a tremendous amount for the US in his career. Bush avoided the war, got rich on bad business deals, got appointed by the supreme court and has done more to screw up America than any other president. You and your children are going to be paying for the first four Bush years for a very long time; don't screw it up even more with another four years of deficit spending to finance the rich, bizzare wars that take our eyes off the real problems (Bin Laden is still running around; islamic fundamentalism is stronger than ever, especially in Iraq, thanks to Bush), etc. etc. I don't think Bush is a moron, but he's bad news, vote Kerry.

7 risk, you're a fucking idiot. Buy a vowel.

9 I wonder what Cher would look like without eyelids. Kevin

10 That story about Cher & her pathetic turnout is second only to idiot-extraordinaire Rosie O'dumbass and her rally of 38 fellow freaks. Here The closer we get to Nov2, the faster the libs will self-destruct.

11 Hey Shelby you fucking iggnoramus, you spelled "u" wrong you pittyful dolt, what reason could I have now to lissen to any of your arguments, you stupit, you. If you had any self esteem you would teer up your voter regasstration card. Yous to stupit to vote for Mr. Brush.

12 Thank for this great post, i like what you read Menu Board. Thumbs up, and keep it going!Thanks for sharing I’ll email my friends about this too LED Billboard. This is a really good read for me, Must admit that you are one of the best bloggers I ever saw Led Signboard.Thanks for posting this informative article LED writing board. I look forward to more updates and will be returning.Cheers!