Doesn't Anybody Know History? What the fuck is this shit?!

Does that remind you of anything? Two letters maybe? 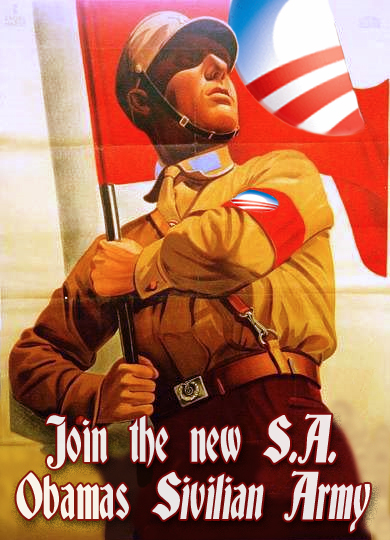 In somewhat related news, today I got some of these:

and did some of this.

2 Seems pretty hopeless. Which, if you think about it makes sense. All that Hope that Obama is generating has to come from somewhere. And it's being derived from the Hope that conservatives once had. He's like a Hope leech. In other news, I can now die happy. That is one perfectly proportioned pooper*. *I'm sorry, I couldn't not say anything!

3 I hope you didn't waste those hollow-points at the range. You might also consider picking up a nice 12 gauge, and an SKS for around the house. Ein Volk Ein Reich Ein Fuhrer

4 Annie: I commend to your readers a piece by Doug Giles entitled "Young Undecideds Who Love Guns Vote Your Glock"... Here's the link.

5 Thanks for the reminder, Shelly. Besides worrying about some RINO douchebag re-introducing the Assault Weapons Ban, we might have to contend with a tripartite liberal super-majority outlawing ALL semi-automatic firearms. At this rate, if things go their luddite way, we won't even be allowed to own a friggin' M1 Garand anymore. I just hope Springfield Armory and Bushmaster survive the coming industrial purge.

6 Civillian National Security Force?? Da hell??... And they call the GOP intrusive? That reminds me too much of Cuba, and the neighborhood Comite de Defensa de la Revolucion "informants". "Apart from formal organizations created by the government, the network of informants also has a significant impact on the lives of Cubans. A physical education teacher in Havana said that "not only these organizations, but the people themselves" are a powerful group. Neighbors watch each other and report to authorities. He added, "Fidel has created such a [complex] system, that we cannot trust each other. For instance, State Security tells me that I am their persona de confianza and that I should watch my neighbor and report on him. At the same time they tell my neighbor that he is their persona de confianza and he should watch me and report to the police." " http://www.freedomhouse.org/template.cfm?page=384&key=126&parent=11&report=69 There had better be a loud, negative reaction to this. What people overemote about in regards to their projections upon Department of Homeland Security and the Patriot Act is actually embodied in this idea.

7 Oh, Annika, I'm so sorry but I am going to have to turn your blog in for this post. Look...I like you, we go way back, you apologize, swear an oath to Obama and I'll let this one slide. But act quickly, I may not be able to intervene on your behalf after Wednesday.

8 don't worry Dawn, after tomorrow, I for one will welcome our new ant overlords.

9 hahahahaha. I love rebuttals in Simpsons form. Cable news would be waay more interesting if that's how everyone rolled.