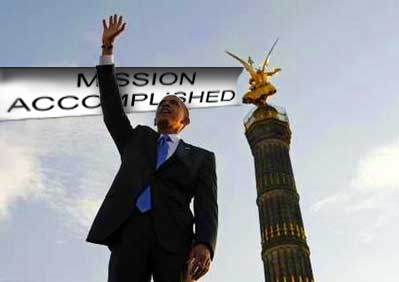 I'm sorry. Did I fuckin' miss something, or isn't this guy not even the nominee yet? Correct me if I'm wrong but doesn't the "moment" when we "change" the "world" into a liberal "paradise" -- with "peace," "healthcare" and free Slurpees for all -- doesn't that "moment" come after the "moment" when the dude actually gets elected president?

1 His fifteen minutes will be well over come November.

2 I think Casca may be on to something.

3 dude, this guy ain't even qualifed for the 15 minutes.

4 I hope you're right. We haven't seen mass hysteria like this since Princess Di. This guy is my senator, and there is a certain amusement to watching a Chicago Democratic pull off selling himself as the ideal for change.

5 Well you are blogging again, look at that. Love it. Think y'all might enjoy this if you haven't seen it already: http://home.earthlink.net/~karmachitao/bobobamahope.html

6 There's no way Barry the Obamessiah wins in November, thank God. He's polling right about the same Kerry was in July of 2004: if he was really headed for victory, he'd be at least ten points out right now, or more. Despite having the media in the tank for him, the guy's just so obviously not ready for prime time that late-breaking undecideds are going to think "that guy?! Are you fucking kidding me?"

7 "Not ready for Prime Time" Hehhehehehe, I'll be using that.

8 Really, if this is all you have to criticize this guy on, then he's a shoe-in.

9 Well, it's "shoo-in" to be precise. The people didn't elect either Gore or Kerry for the exact same reasons; they just aren't regular guys. In the flyover states, they get this, so look for Obama to lose Ohio, Michigan and Pennsylvania, which is where the battlegrounds will be. Game over.

10 Shelly, you're connected to the world wide conspiracy. How's the jewish vote going to break? I'd think that BO would lose a sizeable percentage of that Miami vote. There is no way in hell that Ohio will go BO, although Hillary could have had it this year. You're right on PA & MI too.

11 Obama is fooling no one in Israel. Ohlmert is out and the next PM will be former P.M. Bibi Netanyahu or former P.M. Ehud Barak. I know both personally. Both are hardliners when it ocmes to security. Both are smart as Hell, so they "courted him" or, rather gve him enough respect to protect themselves should he actually pull it off. But they know who their friends will be and they aren't around Obama. As things draw closer, they tend to drop hints to the American Leadership as to whom they prefer; so far, the signals are all in semaphore flags, which may give you some idea as to how they feel.

13 For those who think the "Drill offshore, drill now" sloganeering has any substance whatsoever to it, read this presentation by Matthew Simmons, CEO of the world's largest energy investment bank to the Offshore Technology Conference this year, and the DoE's own analysis that shows that any substantive output from currently banned US offshore sites "would not have a significant impact on domestic crude oil and natural gas production or prices before 2030", and even then "any impact on average wellhead prices is expected to be insignificant"; Oil and Gas Rust: An Evil Worse than Depletion - 2008 Offshore Technology Conference DoE: Impacts of Increased Access to Oil and Natural Gas Resources in the Lower 48 Federal Outer Continental Shelf In short, there's not much there and we don't even have the ability to go after it.